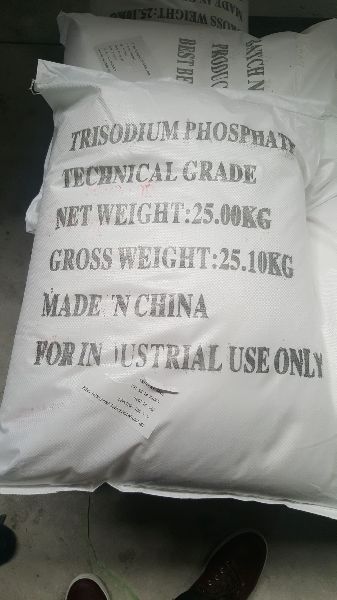 Tri sodium phosphate is a strong chemical typically used as a cleaning agent, food additive, stain remover and degreaser. Commonly sold as a white powder, TSP is also known as trisodium orthophosphate or sodium phosphate. Formerly, you would find this chemical used in a variety of soaps and detergents, but manufacturers no longer use TSP in these products due to ecological concerns.rnrnUse as a Cleaning AgentrnrnTSP has a pH of 12 meaning the chemical is an alkaline. Alkaline agents typically have a powerful capacity to penetrate greases and oils. However, due to ecological concerns manufacturers started to substitute sodium carbonate along with non-ionic surfactants and a small amount of sodium phosphates for TSP in many cleaning products. These newer, safer substances are not as effective as cleaning products with TSP. Additionally, you can use TSP to treat surfaces prior to painting. Further, you can mix TSP with bleach to kill mildew. TSP can damage metal and painted surfaces and can stain woods. Also, you should not use TSP on glass because it will leave a filmy residue.rnUse as a Food AdditivernrnTSP is also commonly used as an acidity regulator and emulsifier, and as a thickening and nutrition enlargement agent in manufactured foods. When used as a food additive, TSP is also known as E339. You can also use TSP in administering an enema due to its laxative effect. In the United States, you can purchase sodium phosphate enemas over the counter. However, you should consult with a medical professional prior to using a TSP enema.

Tell Us What are you looking for? Will call you back